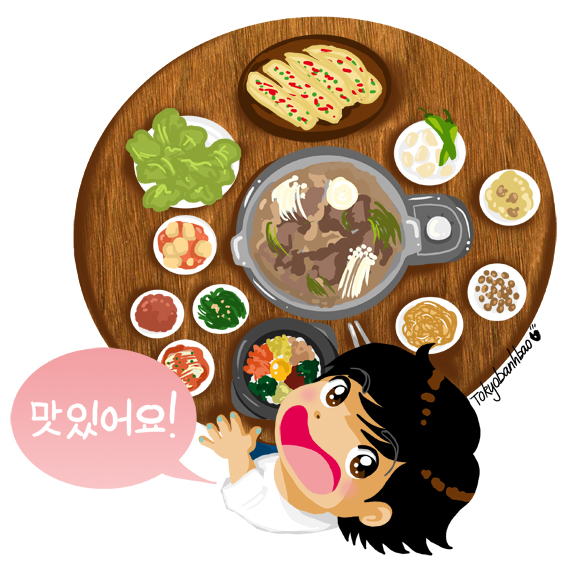 And we continue down this savory path with the Seoul restaurants! As I was saying before, it was really hard to find the addresses I had been recommended, and for some, I’m totally incapable of transcribing them here: I took pictures of the store fronts (when I didn’t have the address), so if someone recognizes a place, they can post the address in the comments below, and I’ll make the modification in the article!

But let’s get back to business…the korean main courses are delicious: I was not a rookie, but I enjoyed discovering new dishes in situ!

(located in the basement floor of the Ssamsigil center, here on the map for the Insadong area) 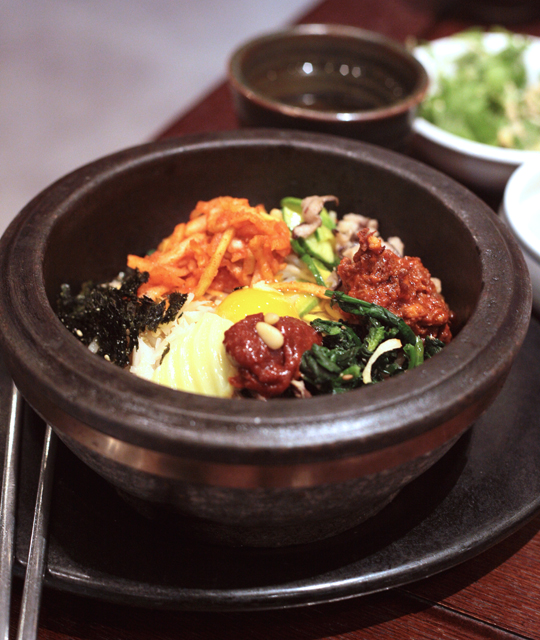 The bibimbap, a classic, that you can find in quite a number of restaurants. The one I like best is the Dolsot bibimbap, that is the one that is served boiling hot in its stone bowl…because I like eating the rice that toasted at the bottom! Yummy!

The korean pancake or Jeon: it can contain seafood, meat, vegetables and/or kimchi (this well-known pickled chinese cabbage that you find in every restaurant as a side dish) 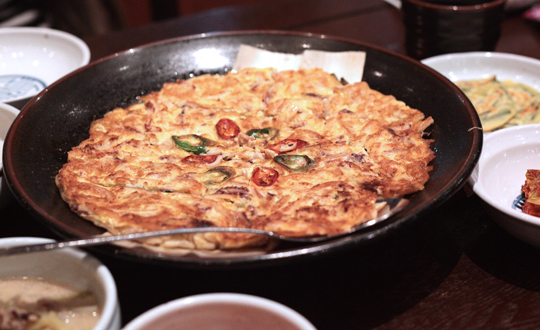 (Metro Jongno 3-Ga, Tel :+82 2733 4516): this address was almost never found, since the taxi driver didn’t even know where the restaurant was located: he had to call the owner so that she could come and get us, once we were in the district! But these efforts were rewarded by a delicious meal! 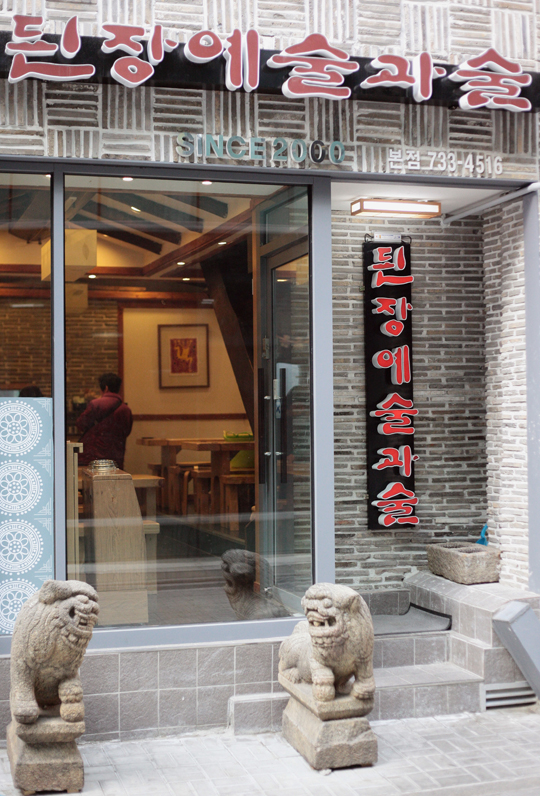 Here, the specialty is the Duinjang bibimbap: it’s a mash up of two korean dishes: the Doenjang jjigae (a tofu stew) and the bibimbap. The waitress (who spoke ONLY korean) explained how we were supposed to eat it, and mixed the two dishes before us. 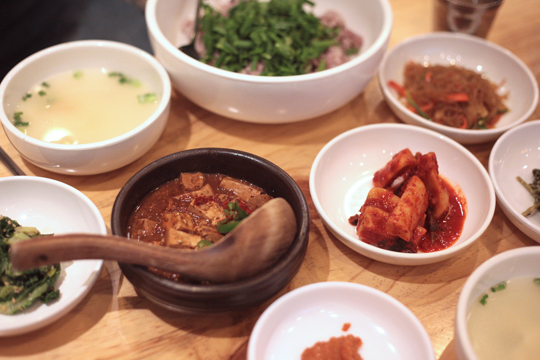 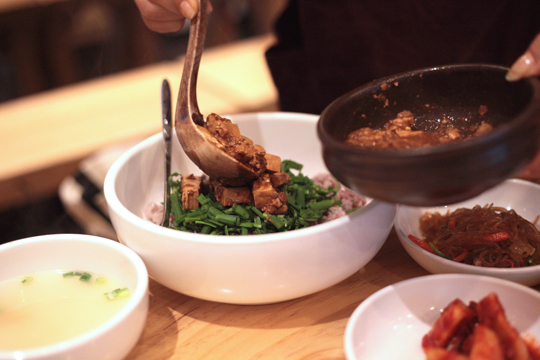 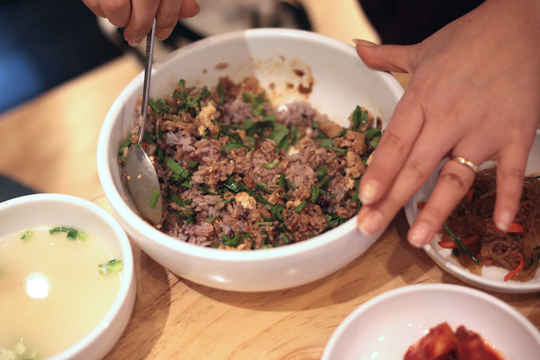 ….truly delicious! I had never had that in France, and with those little vegetable and marinated vermicelli noodles side dishes, it was perfect. Which didn’t keep us from also ordering (oh, so indulgent!) Kimchi pork that you have rolled up in a shiso leaf, with a bit of garlik and fermented soybean paste. Incredible! 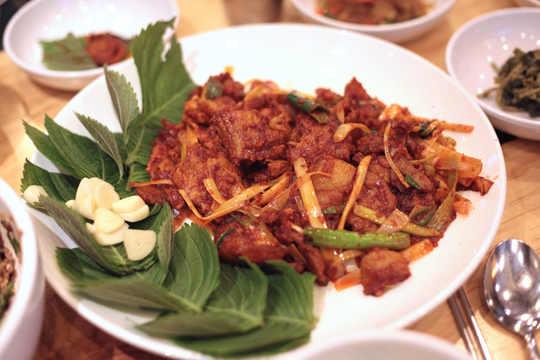 Let’s move on now to the korean barbecue! A Seoul classic! Here’s an address we discovered by chance during a stroll in Insadong.

(I’m thinking that’s the name?): located at the very top of the Insadong-Gil street (here it is on the map), not far from the information kiosk. 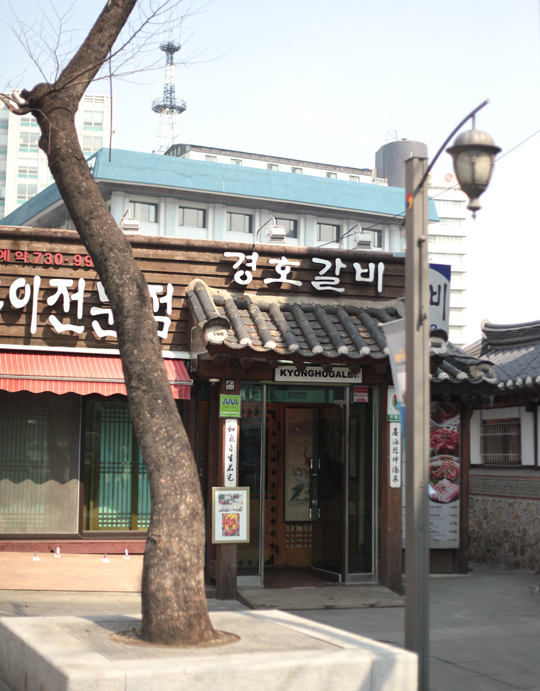 The specialty here is the Galbi (korean grill). There’s a bed of red ambers with a grill over it in the middle of the table on which you sear the meat…but not just any meat! This one is juicy, tender …Just talking about it makes me want to book a flight back to Seoul. 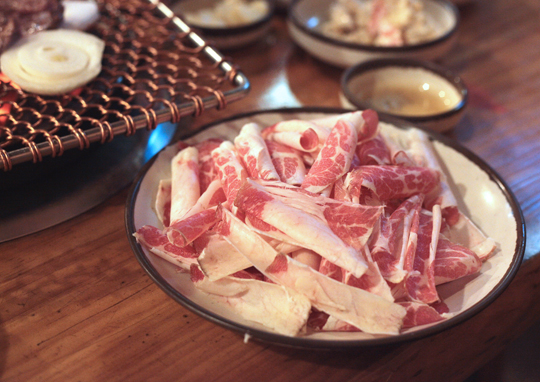 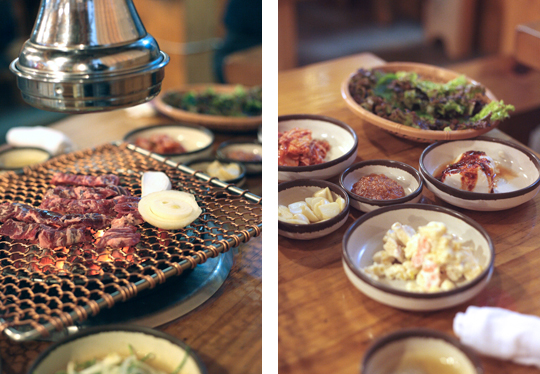 Same idea as before: you roll your piece of grilled meat (beef or pork) up in a lettuce leave. You also put inside the vegetables from the little side dishes, the bit of soybean paste and you enjoy! 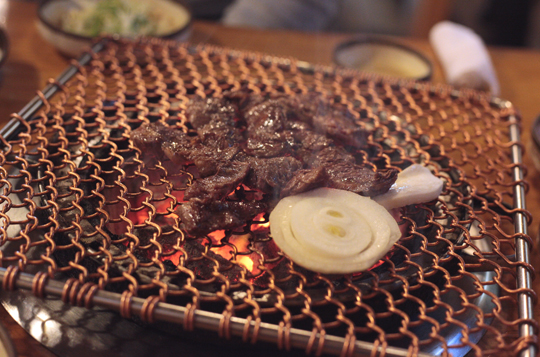 120-15 Seosomun-Dong, Joong Gu (for that one we got lost as well, we asked for help from the passersby once we were in the neighborhood; it in a small alley behind the Samsung building) 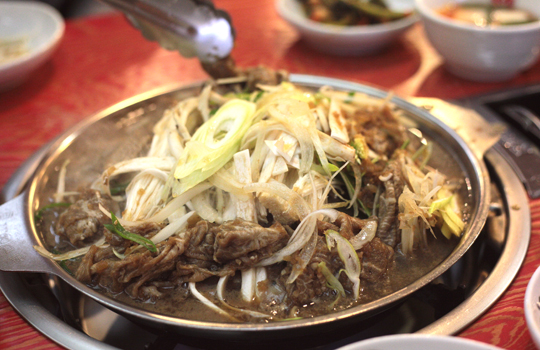 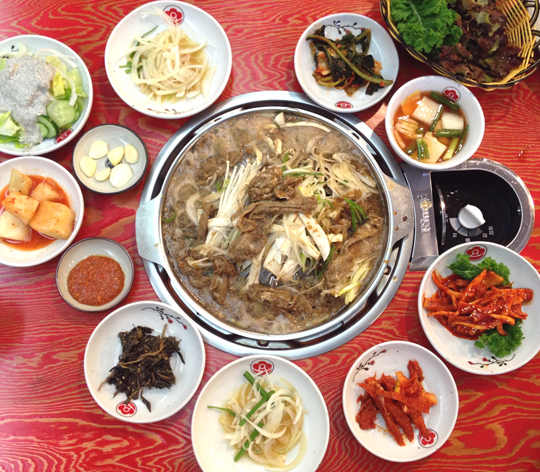 We tried the “Bulgogi” type barbecue: the meat is marinated in a sauce with soy and sesame oil, and cooked on a sort of metal dome. Here too you can roll up lettuce leaves. The grill is less discernable than in the last barbecue, but it’s just as good, and it’s a different experience!

(impossible to tell you its name, it’s in an alley next to Ssamsigil (here): there’s a waiting line in the evening) is a great place for a bite on the go. 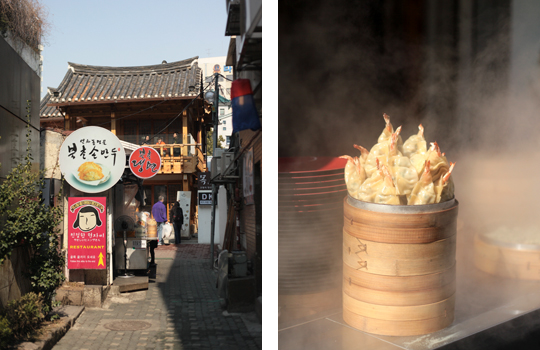 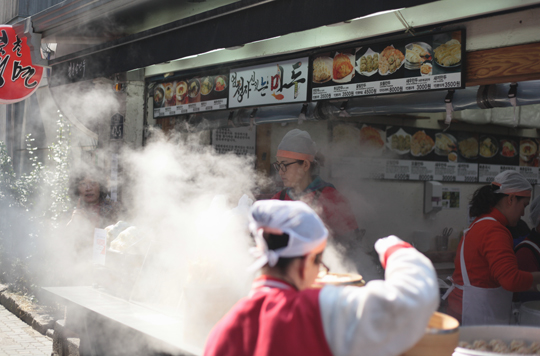 I tried the mix to try out all the different types of raviolis, and my favorite is the one that looks like the (sadly late) Mc Donald’s apple turnover: same texture, but savory, and deliciously good! 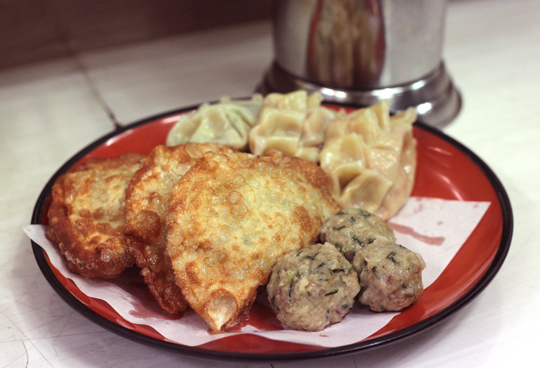 this restaurant was recommended by the hotel receptionist where we were staying, but once again, I’m at loss of remembering the name: that said, it’s located in the street that specializes in pigs feet (here) and I think that most of the restaurants in this street must be of equal merit (or at least that’s what the receptionist said). 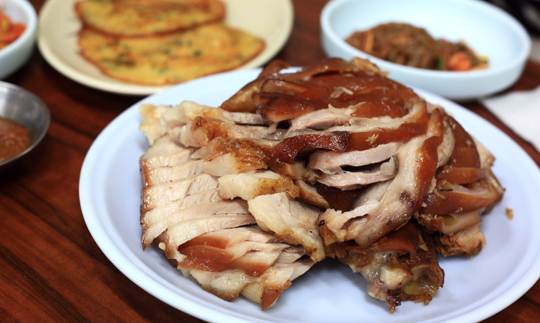 Personally, I like pork better when it’s cooked differently, but we wanted to have “local” food (and we were the only foreigners in the restaurant!). It wasn’t bad, but I don’t really get why the koreans love this dish so much. I’m not really a fan of the gelatinous bit, but it seems that if you eat it often, it helps preserve youth (because of the collagen it contains) … not sure it’s good for the waistline though! 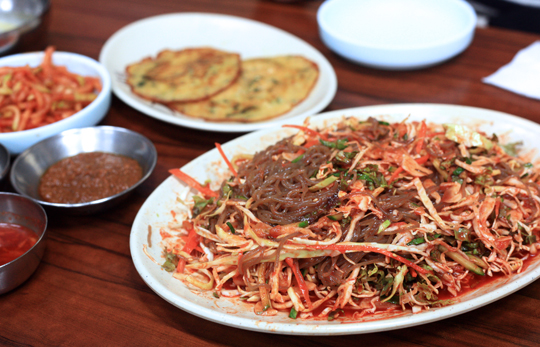 We ordered the exact same dishes as the table next to us: the pigs feet came with this slightly vinegary noodle salad. Pigs feet and noodles are an extremely generous mix. After which, I could almost have rolled back to the metro station (like the pig?)…but at least, I tried it!

The two following places are far from typically korean, but I liked going because they had things that could please my palate:

it’s an ultra cliché bakery chain (the setting gathers all those things that foreigners have in mind when they think about Paris, that is: the Eiffel tower, the breton stripes, the beret…) but it was a nice place for a matcha latte and small pastries. And isn’t the cup just too cute? 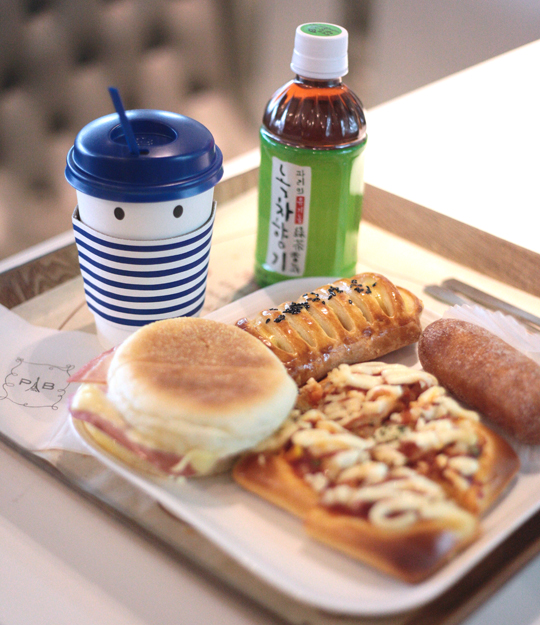 nothing korean there, but this ice cream maker had such original flavors that we really enjoyed the place. The ice-creams are extremely colorful and chemical-lad but…that’s what was so good! For example: the blue-white-red Shooting Star has frizzy pazzy inside, that crackle when you eat it! And you can even order ice-cream cakes for special events! I’d love having something like that in France! 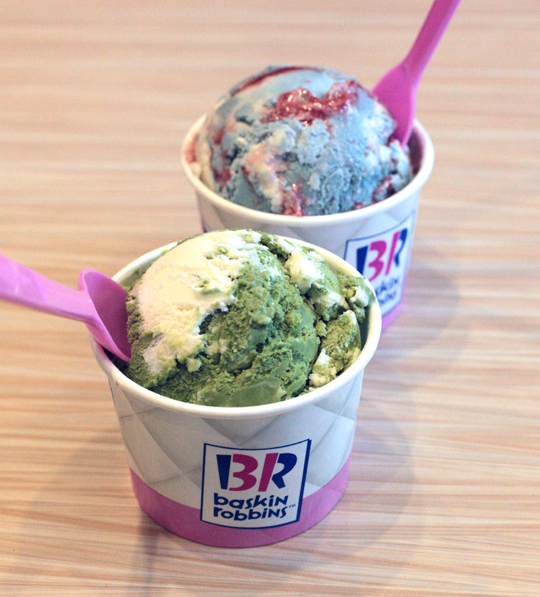 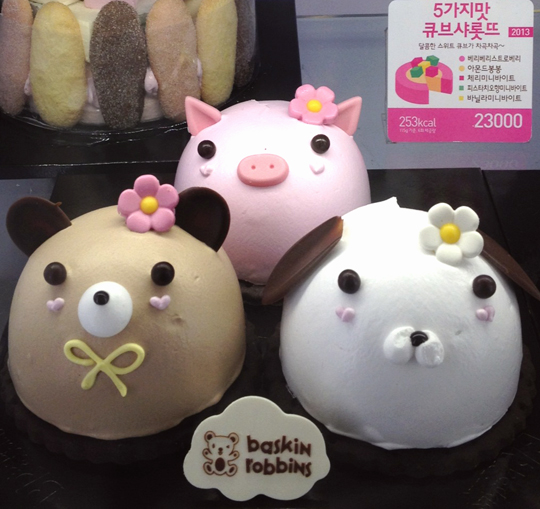 I hope you enjoyed this culinary tour. Of course, I didn’t get to try everything, but it’ll be a good excuse to go back. And if you go, don’t hesitate: share your good spots! (We won’t be sure to find them but you never know!) (ENGLISH translation by Bleu Marine)