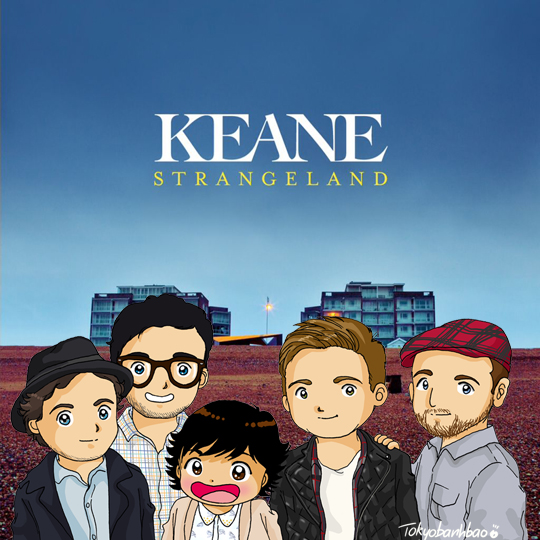 Are you ready to read the journal of the day I spent with Keane on May 14th? Well the choice is not yours to make, I’m taking you along with me anyway! For those of you who might be living on Venus (and have thus spent your time shaving your legs since 2004), that‘s Keane. But that’s not all. 4 albums (and 1 EP) since 2004. Last monday, being able to meet them during the promotion of their latest album Strangeland was kind of like a dream come true, since, as you might know, I’m quite the fan. I had already talked about them (dressed all in technicolor colors) in this post of 2008… Life can be full of surprises! But let’s cut the small talk, and let me tell you all about that day :

1 pm: I meet up with Alex, Keane Project Manager at Barclay’s so that we can go pick the band up at the North Railway Station. We board a huge, very A-Team like van. Once inside, Alex tells me the program for the day: pick Keane up, bring them to the hotel,, leave for the RTL2 studios to record an interview/acoustic session and finish the day at OUI FM for a live one, this time.

1.30 pm: The traffic is a bit dense, but we are finally, and “discreetly” in front of the North Railway Station, waiting for the Eurostar that is bringing us Tom, Tim, Richard and Jesse. If you’re not good at remembering names, here’s a quick reminder: Tom in the middle is the singer with the velvety voice, Tim behind is the bands pianist/composer, Richard is the cap-wearing drummer, and Jesse with the hat is the bassist/guitarist, the 2011 newcomer.

1.50 pm: We are still looking for them when my eyes spot Tom, hidden behind his sunglasses. “Heyy, they’re here!” I elbow-nudge Alex.

1.51 pm: It’s introduction time. I shake hands with the band and their staff. I’m pretty calm (I’m never washing my hands again). And we slowly make our way to the van. I talk to Jesse, starting with meteorological platitudes (no matter what we say, weather was probably invented as a conversation topic to break the ice, I don’t see any other explanation): Paris is sunny, and London is rainy (and I want to slap myself for giving out such fascinating information).

2 pm: I sit up front in the van, and the band goes to sit in the back. I try to get used to their 100% british accent. On the way, we pass a McDonalds: Richard shakes his head upon seeing the name “McBaguette” and sighs: it’s a heresy. Indeed, each country has its own burger: I tell him that in Japan, I had tried the Mc Pork and the Mc Ebi (shrimp). After the weather forecast, a dissertation on burgers, you can feel my professionnalism can’t you? I also learn that Richard is vegetarian, so let’s just say that Paris isn’t going to be all too easy for him.

2.50 pm (heavy traffic): We get to the hotel, and the band takes that time to have lunch and get some rest. On my side, I quickly find a café to try and charge my Iphone. Electricity, water, liiiiiiife!

4.15 pm: Back at the hotel, we are heading for the RTL2 studios. Everyone is there, and I warn the band that I will be taking about a million pictures of them. Richard mischeviously tells me it’s fine as long as I use Photoshop. *Conniving smiles*. 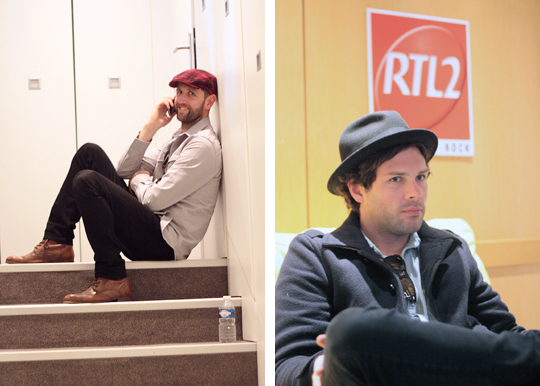 4.50 pm: We get to the RTL2 Studios. While setting up the necessary equipement for the acoustic session, the band is asked to sign Deluxe editions of Strangeland. 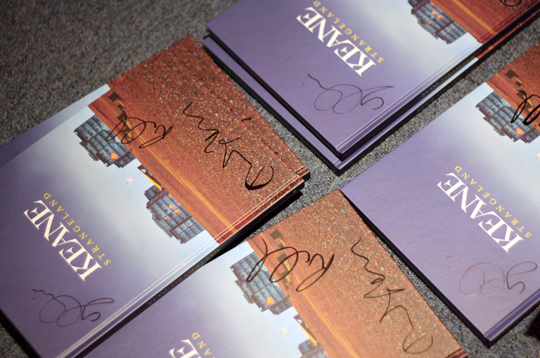 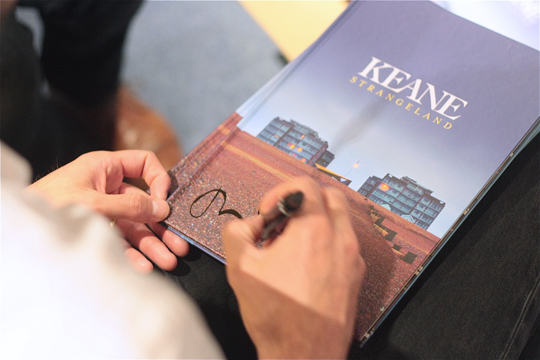 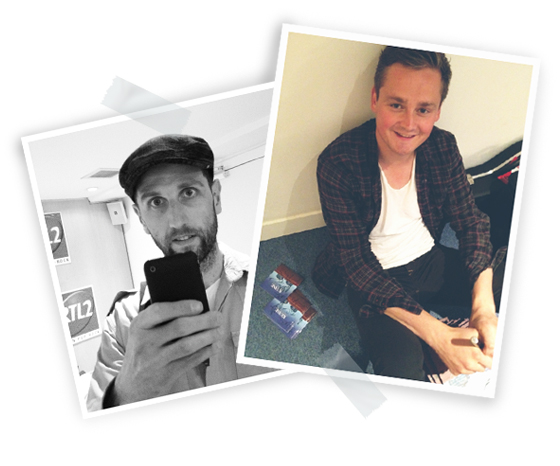 I took the opportunity and asked them to sign my 4 albums, letting them choose who signs which. Jesse directly goes for “Under the iron Sea” (2nd album) even if he wasn’t even part of the band at that time! Tom chooses “Perfect Symmetry”, Tim takes “Strangeland” and Richard gets “Hopes and fears”, their very first album. Having to write “Tokyobanhbao” while being still pretty tired must be somewhat close to torture, but they are gentlemen (and must hate me at this instant). 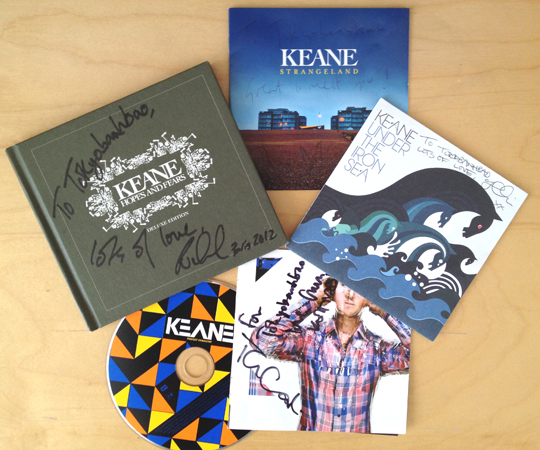 5.20 pm: Everything is in place for the recording, and I find a choice spot to see and hear it all. The band sings 2 songs from their latest album “Silenced by the night” and “Disconnected” to finish off with the emblematic “Somewhere only we know”. 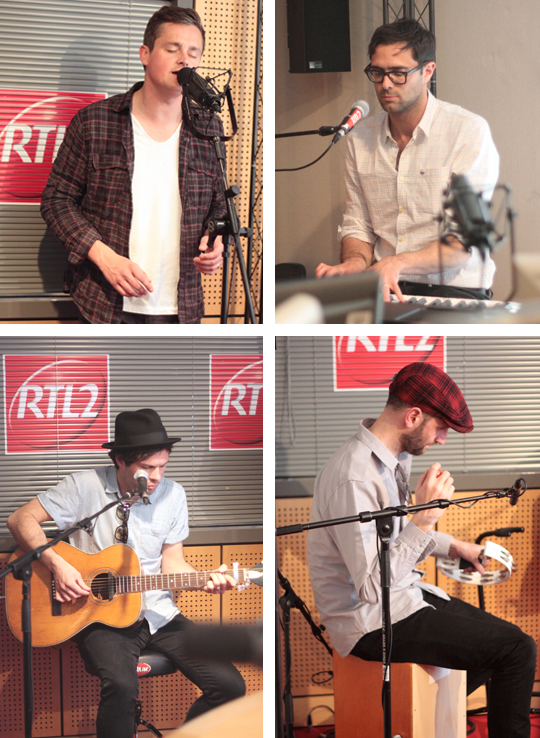 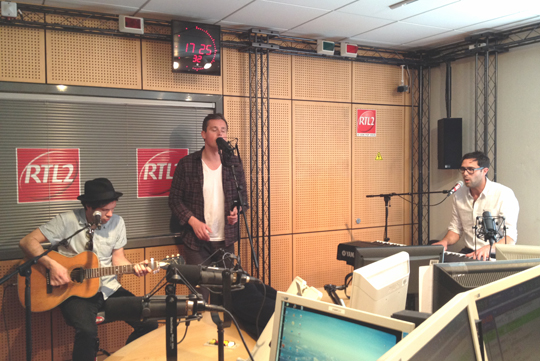 Shivers of pleasure. To see them playing here, in such a confidential setting is oh so precious. The sound is pure, magical. You can hear it for yourself by listing to the session here.

5.40 pm A short rest before Richard and Tom join radio host Grégory Ascher for some Q&A. 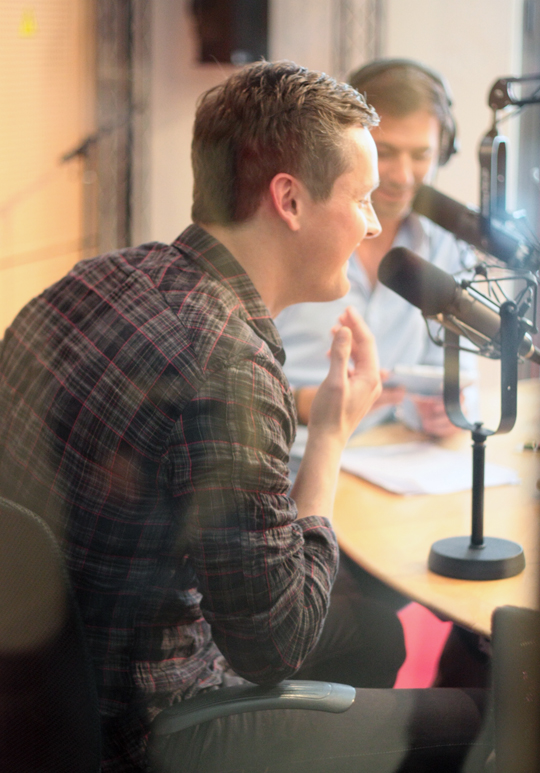 I ask them what kind of music they listen to, and if it’s very different from what they play. Tom tells me he’s going through a “Divine Comedy” phase, Jesse is listening to “Bahamas”, and Richard is more soul and folk, like “Timber Timbre” and “Michael Kiwanuka”. As for Tim, I don’t remember what he listens to, but since he composed something like 80 songs (12 of which were selected for their last album) maybe he doesn’t have time to listen to much anything else, poor thing! 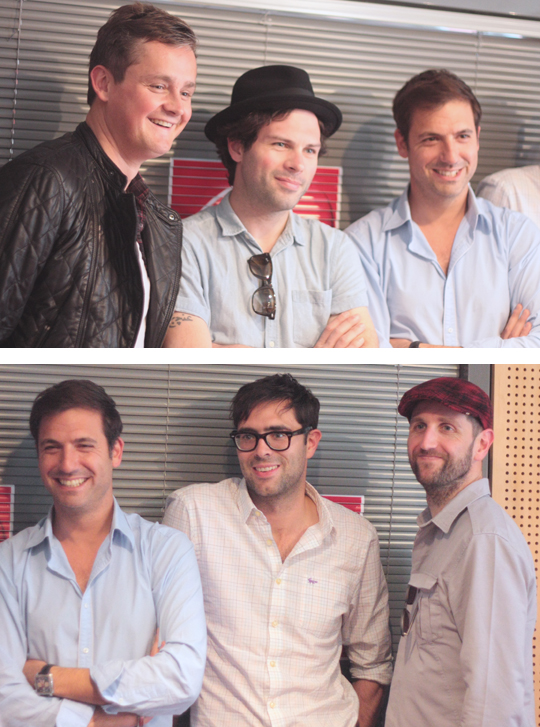 6.30 pm: We take a couple of pictures with the host, and off we go in our magic van, heading to the OUI FM studios.

7 pm : We arrive in the premises of Rock radio. We’ll have to wait a while since the live performance is scheduled for 8pm. The band looks at all the pictures on the wall. 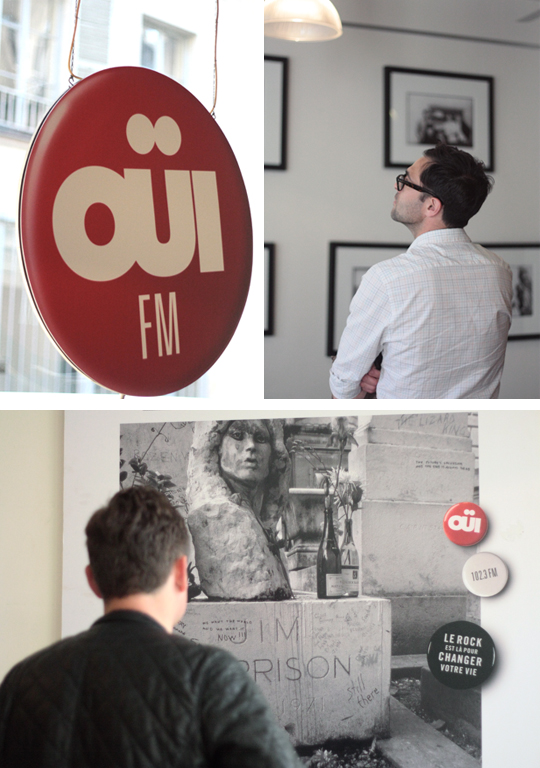 And, surprise, lets raise our heads, what is it I see? Their first album’s gold record (I think it went all the way up to double-platinum). What memories…

7.10 pm : While the other band members take a rest, Richard and I have a chat (I think he’s the most talkative one of the 4). I tell him how I feel about their last album, how I feel it’s more in line with their initial style, but with an additional pinch of optimism. He agrees on that bit. I also admit to not really having liked the “Night Train” EP (wooo, I’m such a rebel!), but that I am now totally happy and content with Strangeland.

And then we start talking about something completely different: fashion. I ask him if they have any interest in fashion (they had been invited by Burberry to sing during their spectacular 2011 fashion show in China) and I ask him to break down his outfit. 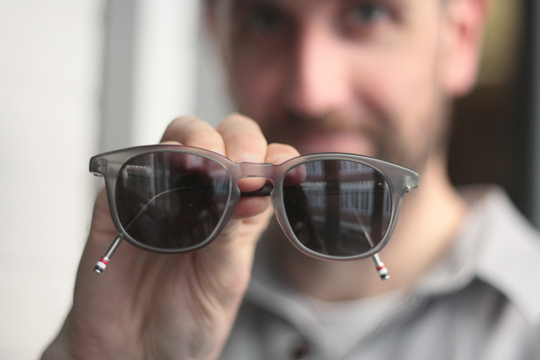 His checkered cap is from Paul Smith, one of his favorite brands, his jeans is Burberry and his shoes Hudson, of which he tells me he prefers them when they’ve acquired a nice patina over time (so do I). And his last fancy buy were these Thom Browne glasses. Fashion Blog Power. I really like their syle, simple but classy : all in all, very English.

7.50 pm : I head downstairs to see what the others are up to. Jesse comes up to me with a sorry pout, telling me he’s starting to get bored. Jesse is the most endearing in my eyes, probably because he’s the youngest one of the 4. He always has that little pout that makes you want to comfort him: I try to cheer him up by reminding him about their big day tomorrow: the Concert! At the Casino de Paris! The fans! … But it’s true that I can understand that a promotion day isn’t terribly relaxing, and I can but only admire their patience. 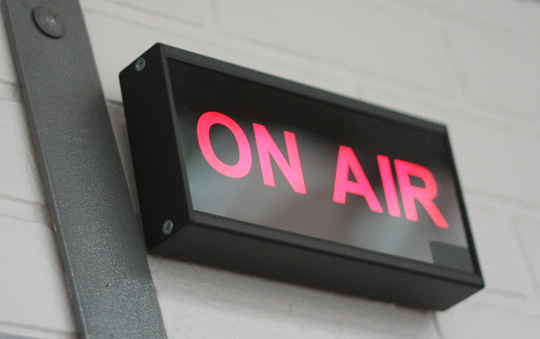 8 pm : No time to feel down though Jesse! The live broadcast of the radio show “Au secours c’est du live !”(=”Help, we’re on air!”) is about to begin! They sing their single “Silenced by the night” and we get a little flash back with “Is it any wonder?”. Still as beautiful.

Then comes a relaxed interview with Dom Kiris: he asks Tom where he learned to sing, and Tom tells us about his vocal inspiration, Freddy Mercury. The band then talks about how Jesse integrated the group, and tease him a bit. He had been working with them since 2008, so it felt completely natural that he be officially integrated into the band in 2011. 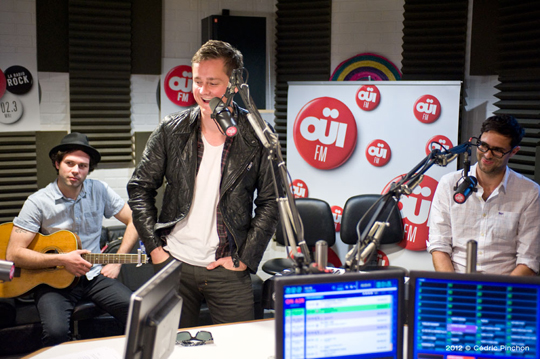 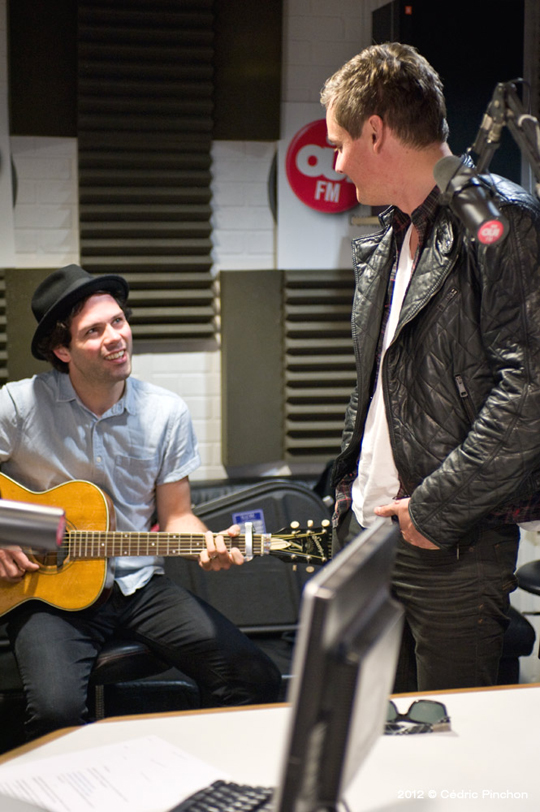 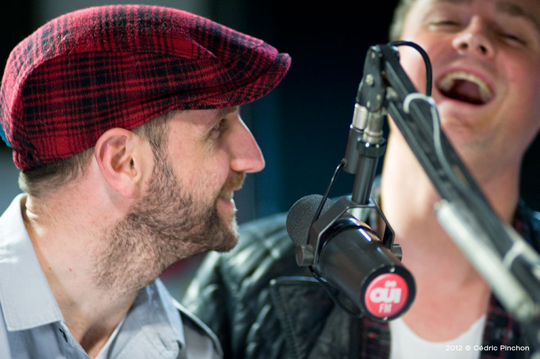 8.30 pm : End of the show, Yeeeehaaaaa! … and also the end of my day with these darling englishmen. The time has come to say goodbye. A not too teary goodbye since I know that I’ll be seeing them perform tomorrow at the Casino de Paris. This time the handshakes turned into kisses on the cheek (Wooohooo!). And I head back home for a good night’s sleep. 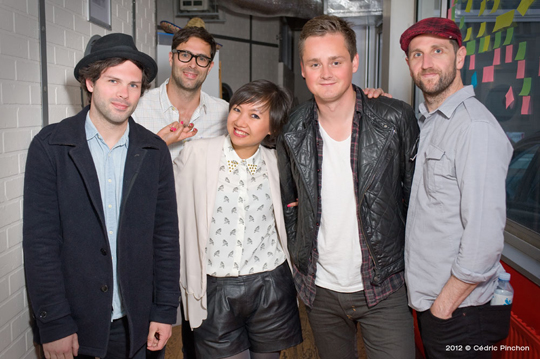 The next day was that of the concert at the Casino de Paris. It’s a perfect venue to rediscover Keane (I had already been at their two Zenith concerts, and well, a smaller space is always better, sound wise). I’ll let you imagine the atmosphere with these couple pictures taken during the evening. 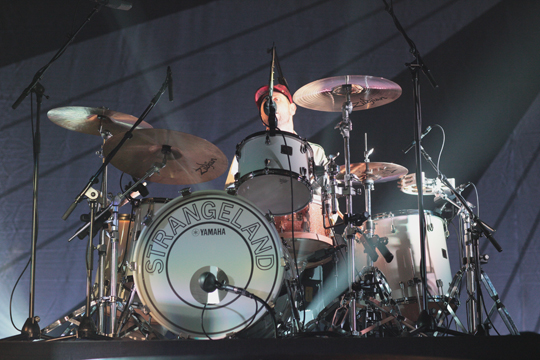 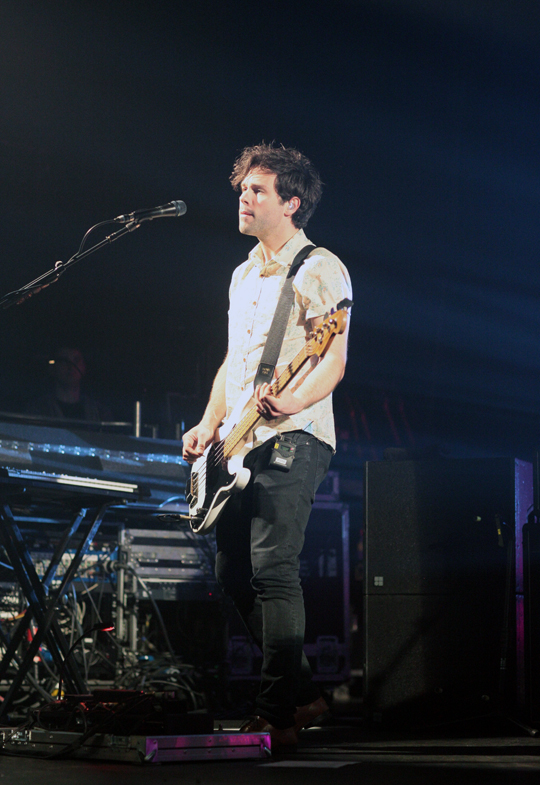 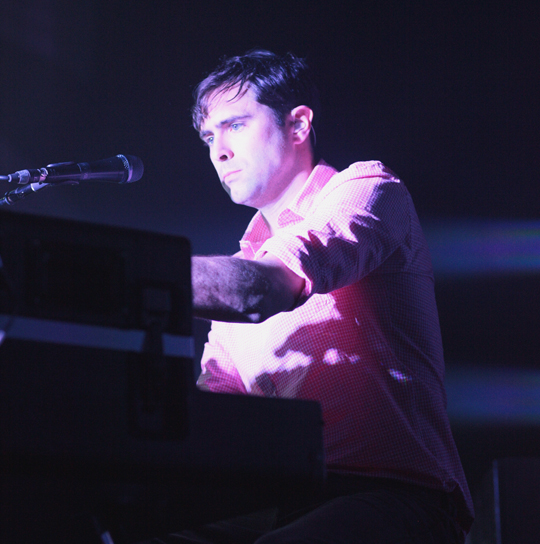 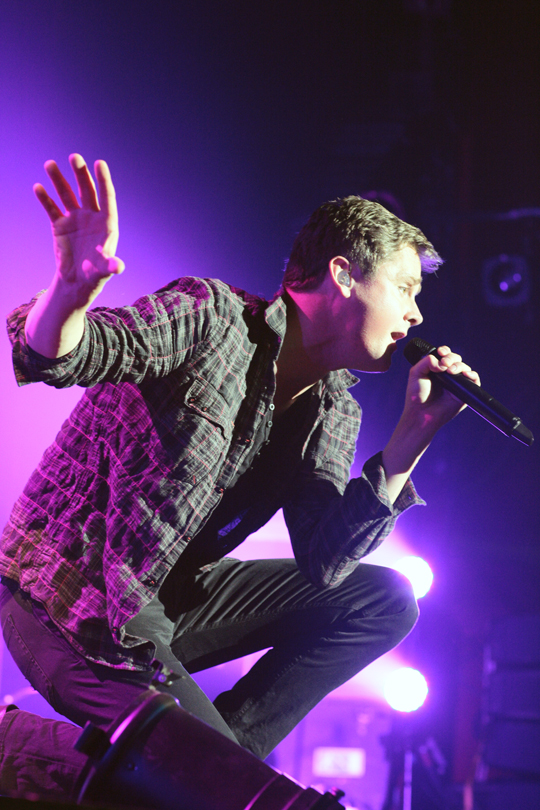 To finish this off, for yes! my journal is almost done, I congratulate all those of you who managed to read this all the way to the end, I hope your eyes aren’t too sore: as you can guess, I loved spending the day with the people I listen to almost all the time when I’m drawing or driving (I find their latest album is actually even better to listen to in car, by train, well, in motion …)

Even if it is what I had been expecting all along, I met incredibly charming, simple, cute, gentlemanly, endearing and lively young men. For the space of a day, Strangeland turned into Dreamland for me.

PS : Thank you Keane, because I love you guys; Thank you to the whole managing team, that let me have so much freedom of action during that day; to Alex, Anthony, Aurore, the great people from Barclay Universal, that organized the whole thing brilliantly; to the teams at RTL2 and OUI FM that gave us all such a warm welcome; to my man for the pictures during the concert; to the photographer, Cédric Pinchon, for his additional pictures during the OUI FM session; to the very friendly magic van drivers, who allowed me to be their co-pilot. Thank you, I couldn’t have wished for more. (English translation by Bleu Marine)