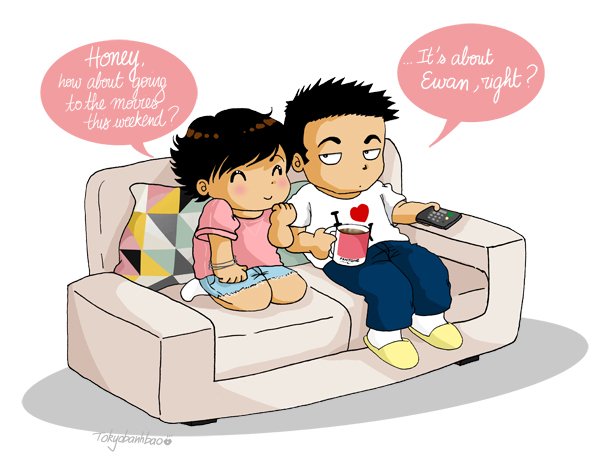 Just when you think it’s over … well it’s not! It’s the never ending story! After having (momentarily) given up on seeing Cosmopolis, even if at some point I will have to go and see it – if only to make up my own mind about this soporific/intriguing/slow (according to the critics I read) movie – I have a new target! Indeed, last wednesday, a new movie was released in theaters, and it’s « Ewan McGregor inclusive ».

Although the french title isn’t very engaging: « Salmons in the desert », it somehow really makes me want to see the movie. Let’s admit that the original title: « Salmon fishing in the Yemen » isn’t very attractive either. It seems there’s some romance going on in the movie, and you know that that is bound to get me running to the theater (even if I can be a bit picky – it can’t be too mushy either). So I’m hoping I’ll find the time to go see it, and that I won’t abandon Ewan like I did Robert. Ewan, wait up, you know you’re my favorite!

PS: I thought of you in case you were getting bored at home or work: how about a game of « spot the 7 differences » between the drawings for this post and the one for Cosmopolis? Will you be able to find them all? ( English translation by Bleu Marine)