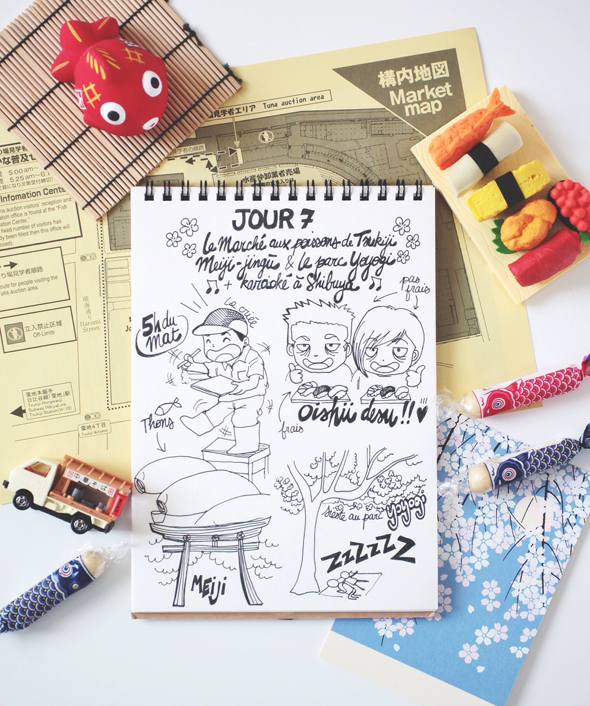 Wake up! Because, if I tell you that on the seventh day we woke up at 2:30 am (got to bed at midnight FYI) to go to the auction of Tsukiji’s fish market, you think we are: Brave/ Crazy? (Delete as appropriate). When I think about it now I think the answer is yes indeed…

I have always been told that this place had to be seen in Tokyo and as I haven’t got the chance to do it last time, I gave in to the waking-up duty. 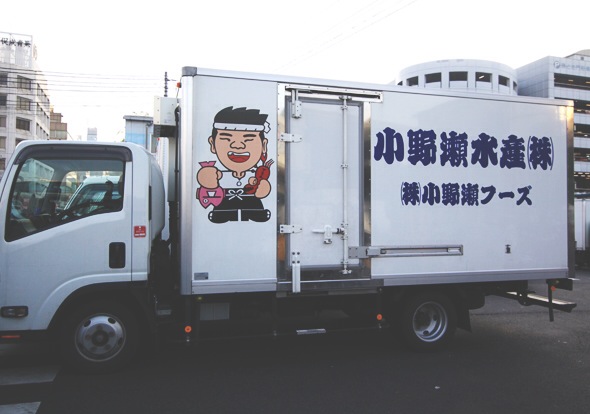 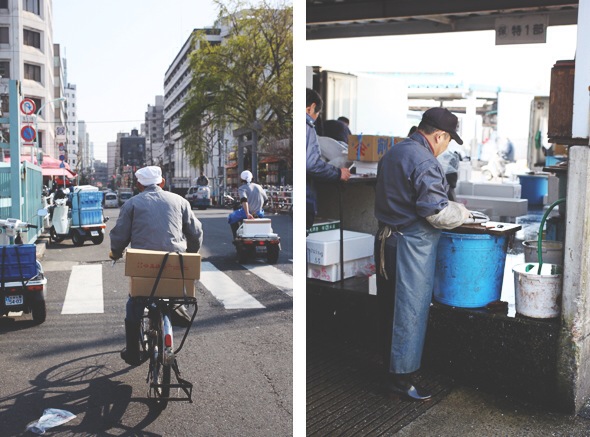 I asked our wonderful concierge about it and she told me that we needed to get there very early (meaning 3:30-4 pm tops) to get a chance to see the auction at 5 am. Because yes, only 120 privileged (or early birds, as you wish) are admitted to the market, divided in 2 groups of 60 to get to the famous tuna auction (one session at 5 am and another one at 5:25 am). 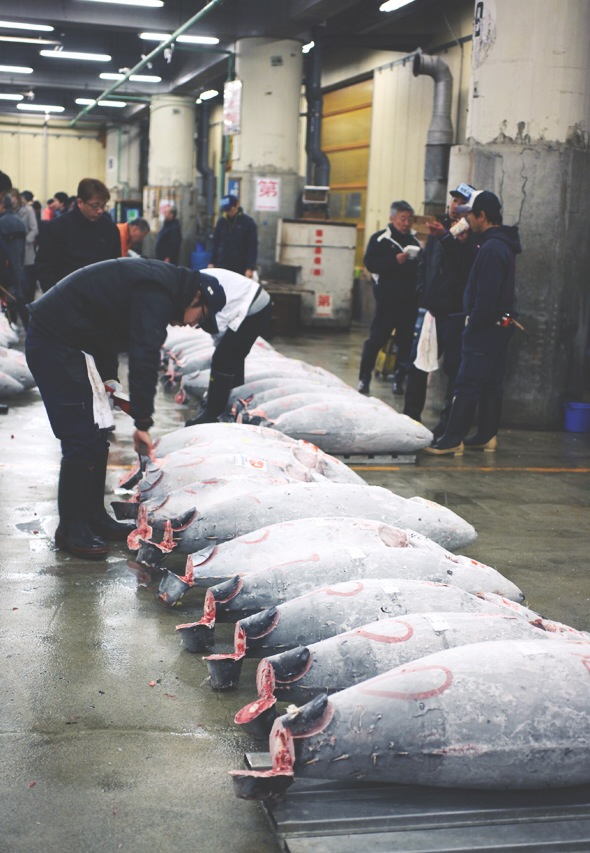 Picture this : we arrived at 3.15 (we took a cab, as the metro wasn’t opened yet at this time of day) and thought we were the first ones to be there, we finally ended up in the second group of 60 (there were only around 20 spots left after us)… this shows the extreme motivation of tourists ! 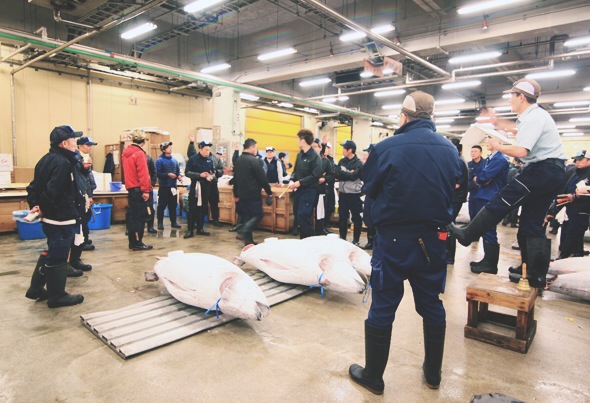 OK, so? Was it worth it? I can proudly say “Yes! I have been there!” but I must admit I was a bit disappointed. I heard everything about this auction: “fantastic”, “spectacular” …

Yes it was quite “folkloric” thanks to the master of the auction (let’s call him that), shaking his bell, gesticulating and yelling like jay-Z at a concert. He seems to be yelling the prices and most probably the number of each tuna displaced in front of him: a real Wall Street for tunas. 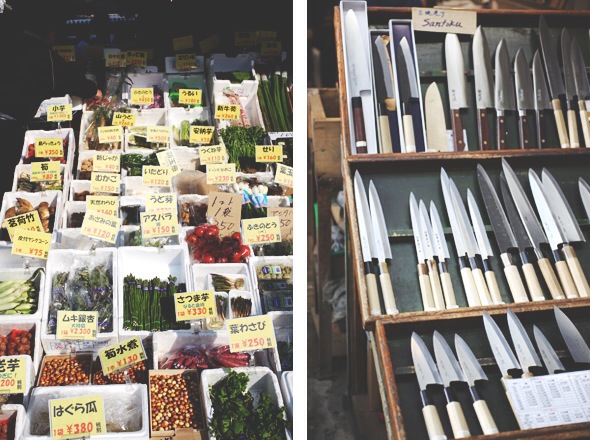 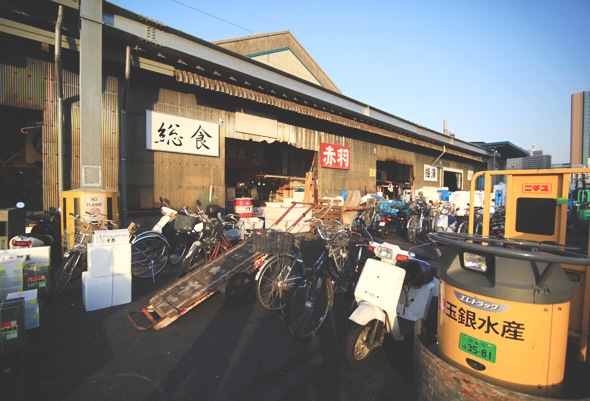 But it doesn’t last very long (15 minutes) compared to the effort made by the waiting / waking up. So I don’t really know what to recommend you.

If you want to say “I have done it!” then get up early otherwise it is not a big deal if you miss it, the market opens at 9 am and it is quite nice to wonder around its alleys. 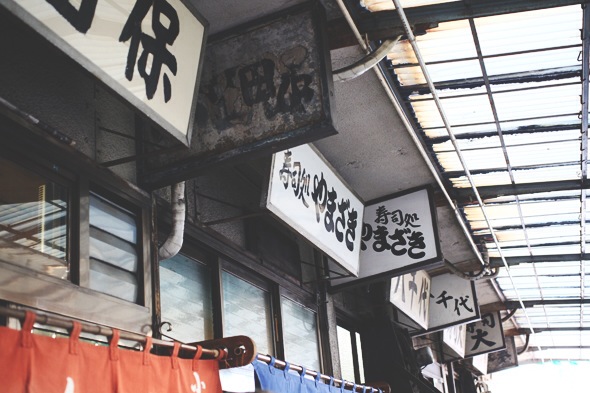 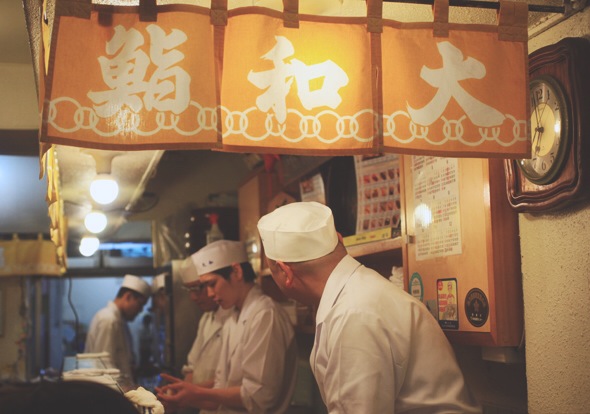 That said, it is also customary to carry on with a sushi tasting in one of the market’s restaurants: the fish is therefore so fresh. I had never had sushi so early in the morning (a platter of sushi at 6 am: are you in?), but I really enjoyed the quality. 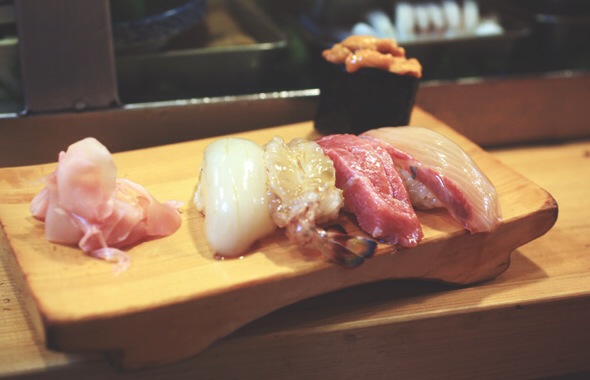 That said, I thought the sushi chefs tended to force your order (you order the sushi as you go) so if you have a limited budget, say it from the start so that they don’t constantly offer sushi and so that you don’t end up broke, as well as exhausted. 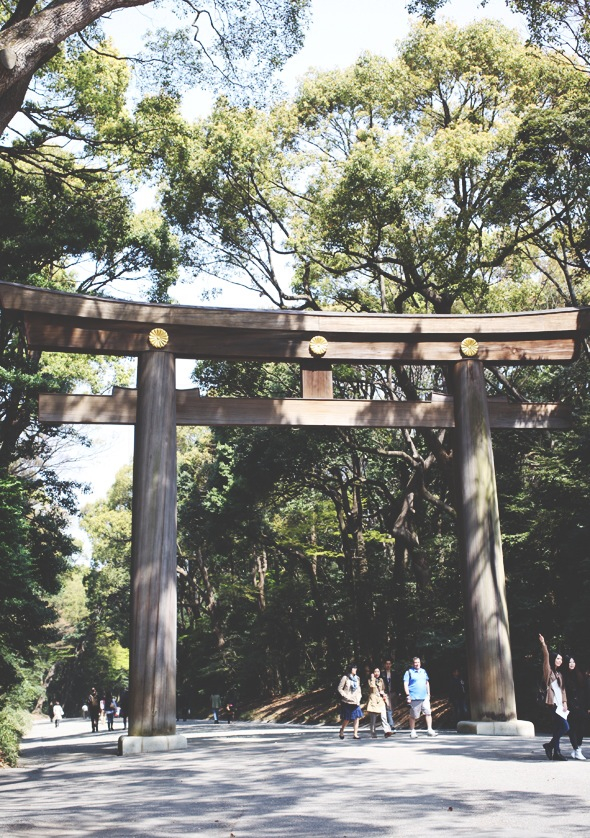 What did we do next on this freshly started day? Next stop: the Meiji shrine next to Harajuku: as beautiful as it was back in 2007. I thought about you and put a votive plate (Ema 絵馬) to wish you luck! 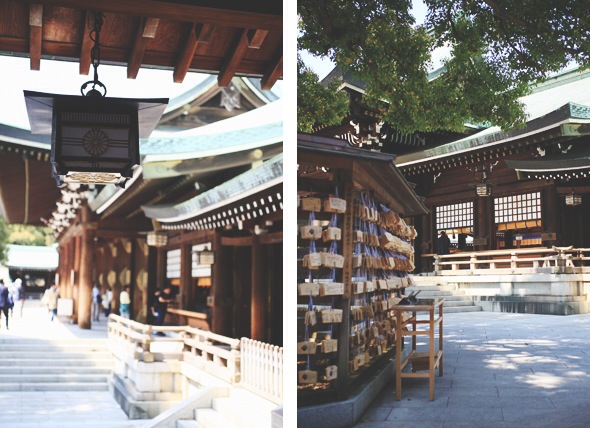 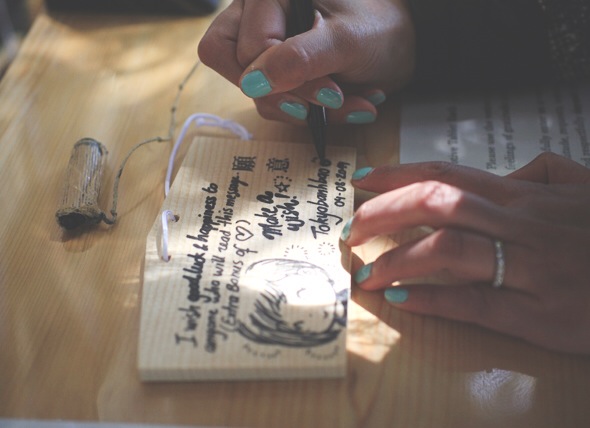 In Shintoist shrines, it is customary to write on these wooden plates something that you wish to happen to you (at the costs of thank you messages by the way): So I have made a group request! 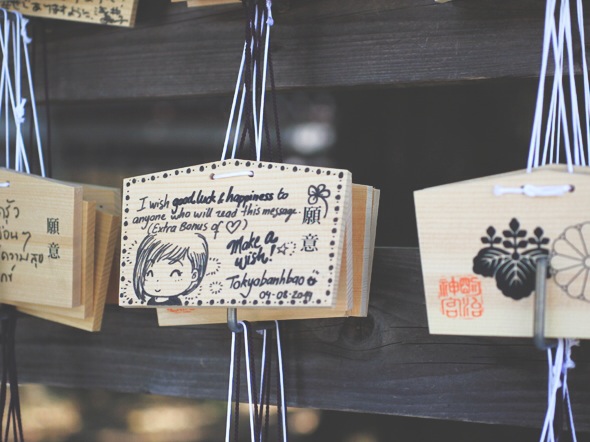 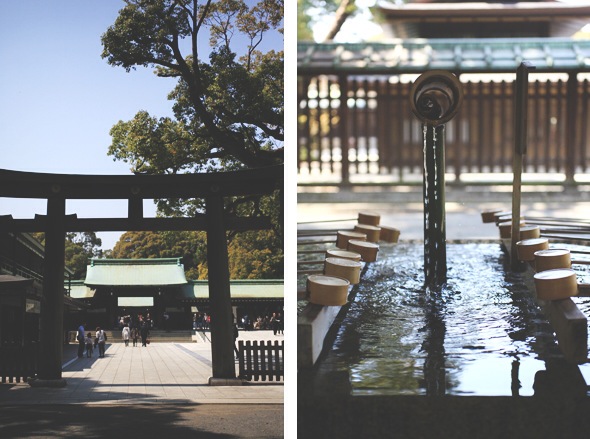 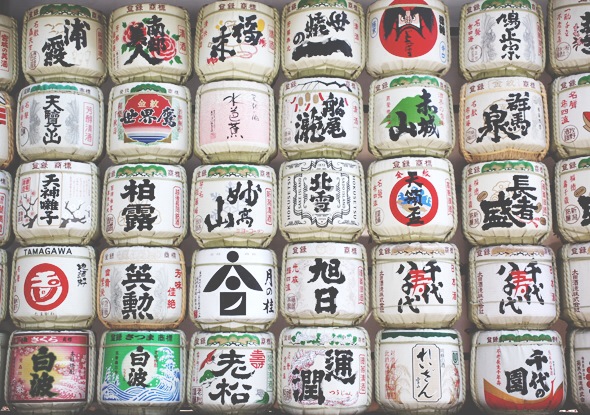 Then, we began to feel very tired so we headed up to Yoyogi Park to admire the flowered cherry trees. 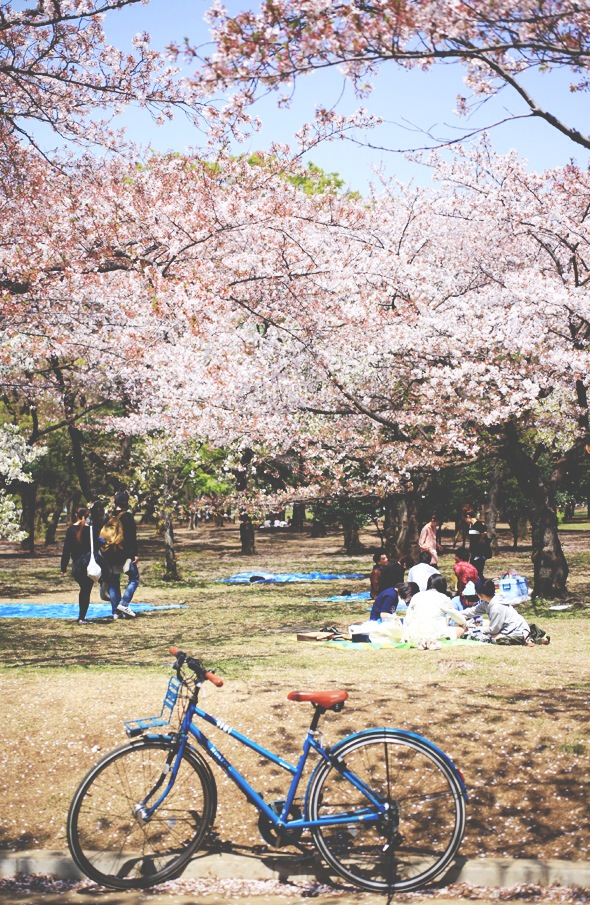 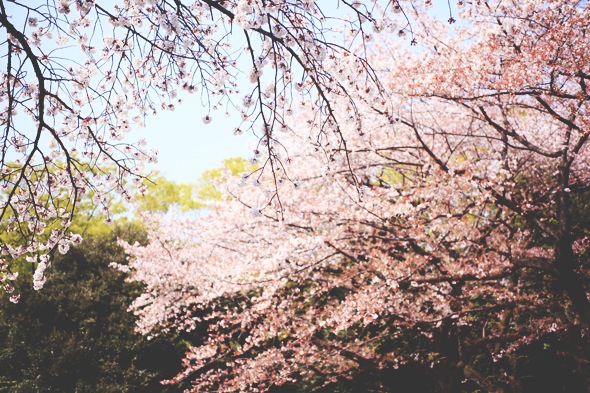 This time, the picnic was cut short as we have fallen into the arms of Morpheus in the shadow of a cherry tree and woke up at the last moment right before a raven had decided to bless us (phew, what a good idea to move at this very moment). 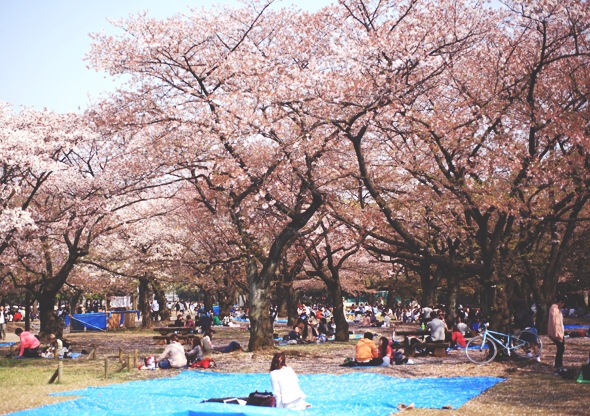 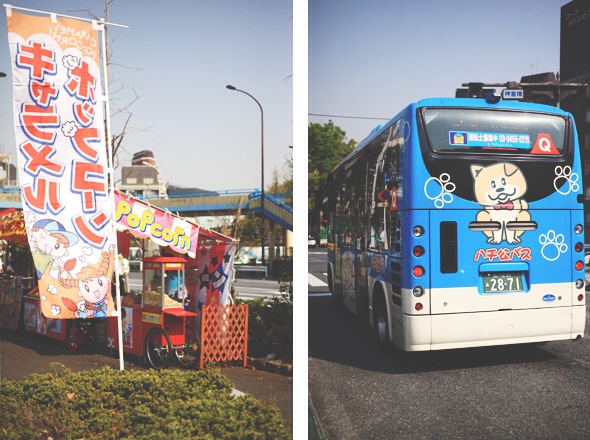 Quick stroll to Shibuya at the end of the day for a private karaoke (I so whished there could be the same thing in France!) and bam! straight to bed! 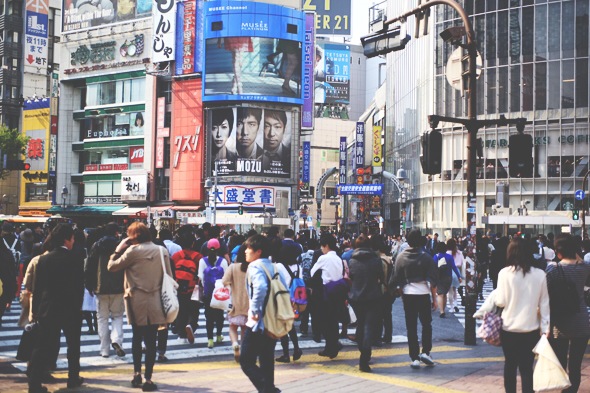 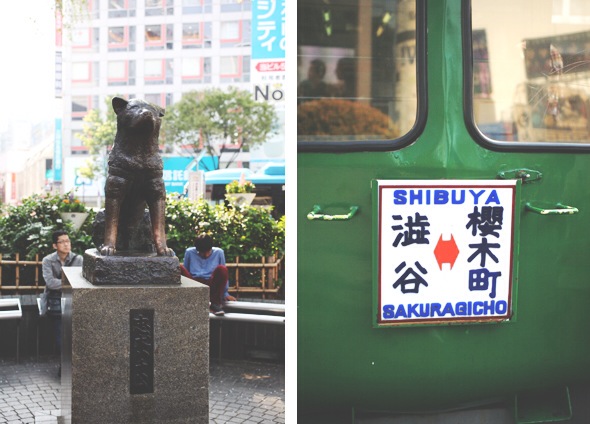 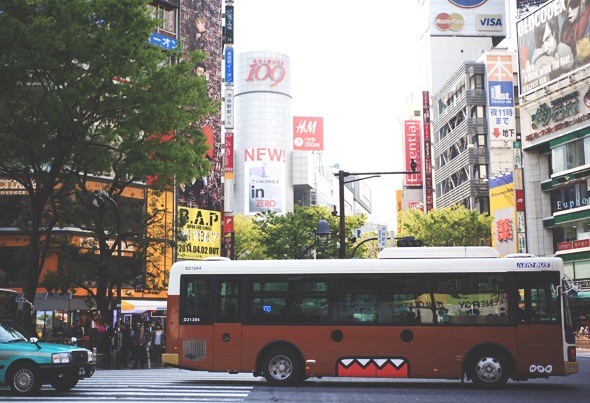